Home page > News > The infrared film or the long-wave heater?

The infrared film or the long-wave heater?

The infrared film or the long-wave heater?

Despite its "young age", radiant heating is already quite diverse and divided depending on the length of the wave and the design of the infrared radiation source (the infrared film or ceiling/wall-mounted heaters). The general advantage of all types of infrared heating is that during operating such equipment (laid infrared film or a system of external sources), the air is not a primary conductor of heat since infrared rays have a peculiar nature to directly heat the objects, surfaces, and even interact with the human body. Such an effect is completely safe because the IR rays are of natural origin and are often compared to the sunbeams. Due to the described method of heating a person feels comfortable in the room, even when the air temperature is dropped by 2-3 degrees. Having some positive traits in common, of course, each system has a number of features that may influence the choice. 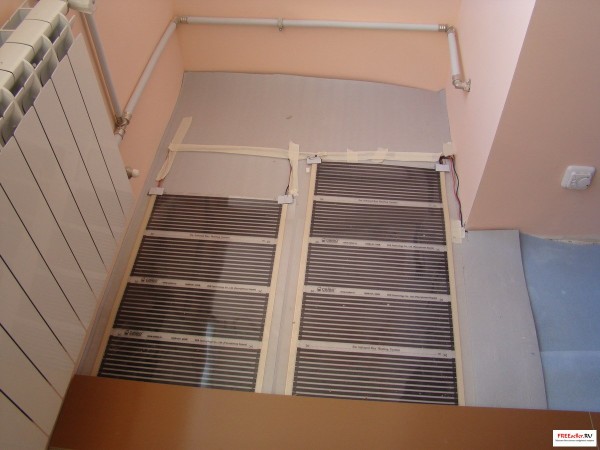 The infrared heating film - is a super slim IR heat source, which can be laid under almost any surface. The main advantage over the "warm floor" cable system is that infrared film with its components do not create an electromagnetic field as opposed to the cables laid under the floor, and thus can be used in children's, medical and health institutions. Installation of the IR film is most often chosen to evenly heat the area of the room. Such a system is laid in a dry way (under laminate, linoleum, parquet, etc.) without additional cement linings unless otherwise specified by the flooring itself. The infrared film placed under the tile, which is laid on a cement base, will not be damaged or lose its efficiency. For such versatility, the infrared film is obliged to its multi-layered structure, which consists of polyethylene terephthalate, the adhesive material, a nonwoven fabric, again the adhesive material and PET while the "heart" of the film are copper conducting bus bars with a carbon coating. The latter has a high thermal conductivity, and does not intake any of the produced heat. The infrared film laid even under rough vertical surfaces (roofs, walls, columns, individual elements of decor) can be heated to not more than 55 degrees - it's been proven that this temperature is optimal for all kinds of building materials and finishing agents, and at the same time it's enough to heat the room to the desired temperature. Despite the fact that the infrared film is, in principle, quite powerful for maintaining a comfortable temperature level in the lower part of the room, it is still not enough to provide a qualitative heating of large objects, especially heating of industrial premises, where the task is mostly to prevent freezing of the equipment and piping systems responsible for transporting substances. That is why the infrared film is most often used as an additional heating source if it is possible to lay it on the stage of floor covering or other major repairs. 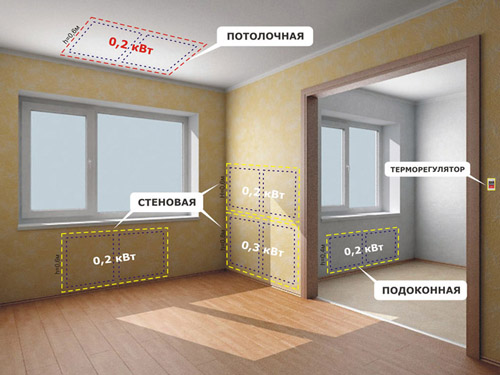 In order to enjoy all the advantages of infrared heating, you may consult a specialist about creating a wall- or ceiling-mounted system of external heaters. Long-wave infrared heaters have different configurations depending on the designation. This allows you to choose the most efficient and flexible heating system featuring household or industrial models. Infrared heaters do not depend on each other, which means that you can configure an alternate switching on and off, local heating, or even dismantle a part of the system to use it elsewhere. At that, it is only necessary to install an additional thermoregulator that will control the operation of the system. Ceiling infrared heaters are mostly used for a primary heating of large rooms with significant levels of heat loss. The method of operation of IR equipment, which has been described at the beginning, allows you to directly heat the equipment, pipelines, and the furniture at the exact angle as it is used by man. Wall-mounted infrared heaters are suitable for heating of the bottom of the room, at the same time they create a thermal "ring" around the perimeter preventing the ingress of cold air into the room.

Radiant heating, whether it's the infrared film or the infrared heater, allows us to solve the main problem of all other types of heating - the heat loss due to the fact that the air is bad at keeping warmth. This adversely affects the efficiency characteristics, so sooner or later without any additional action on heat insulation, such systems become disadvantageous. Infrared heaters, as an absolute basis of infrared heating, relieve the owner of such problems and provide mobile, efficient and safe heating for decades to come.